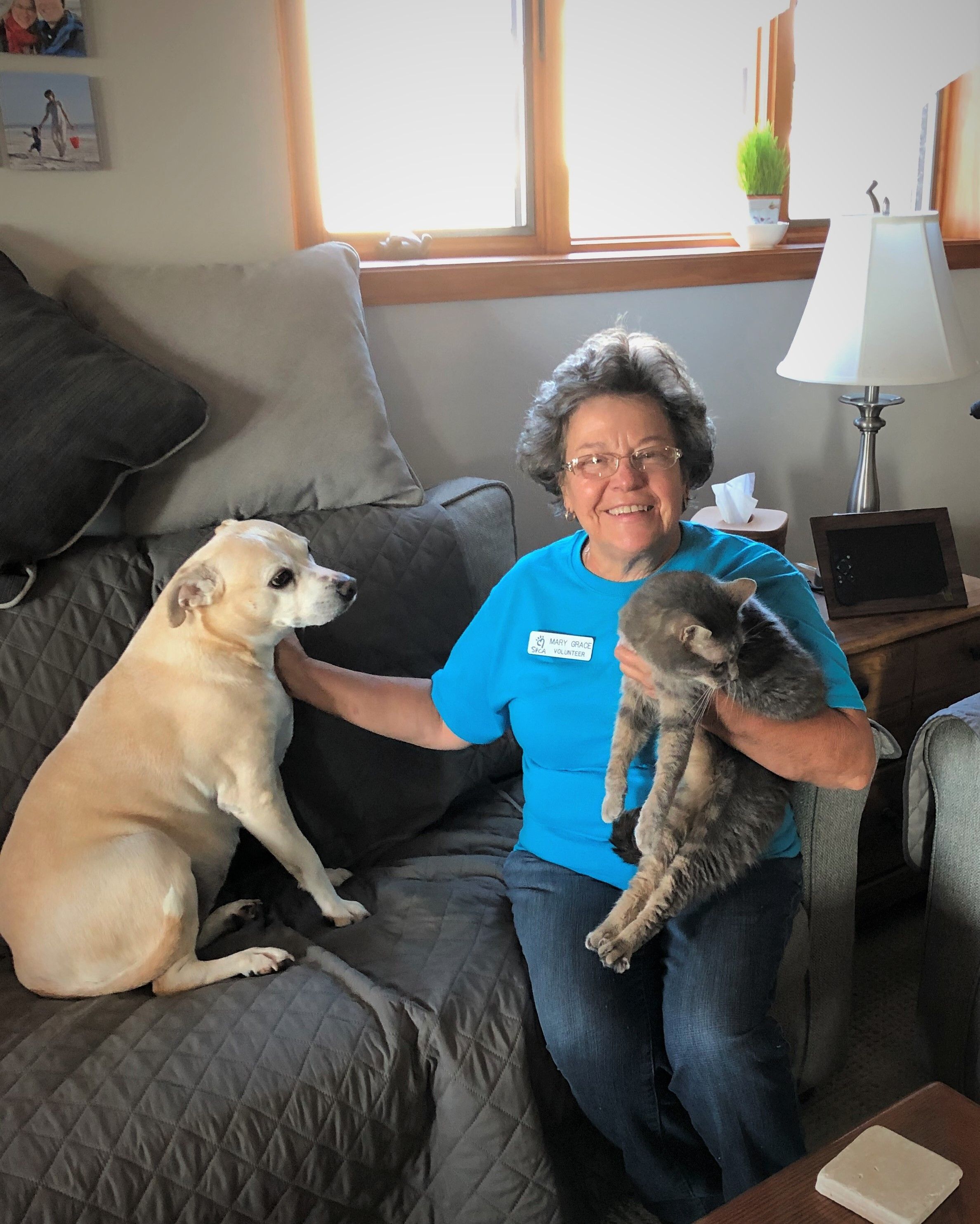 Earlier this year, we created a new volunteer role at our shelter - kennel greeter. The role is designed to help direct the flow of kennel traffic, ensuring the safety of dog walking volunteers, staff, the community, and of course, the dogs. One of the first people to step into this role was Mary Grace King, a generous, kind-hearted woman who was looking for a way to help animals in need. Although Mary Grace was new to the role, she was not at all new to animal rescue or even to the York County SPCA.

In fact, her connection to the YCSPCA is rooted in her first dog, Toby, who was a Bluetick Coonhound mix. Mary Grace and her husband, Jeffery, adopted Toby from our Thomasville shelter in 2004. Toby had suffered neglect in the beginning of his life, and he needed to be rescued by our previous Humane Society Police Officer. Fortunately, once Toby was safe and sound, he would never need to look back on those days. Mary Grace and Jeffrey met and adopted Toby as soon as he became available, and he would go on to live a long life of bliss with them, their daughters, and their numerous cats.

Their family was never without rescue pets, and that’s probably why their two daughters also became avid animal lovers. Now adults, both have their own families of rescue dogs and cats. One daughter attended veterinary school in Philadelphia where she became involved with ACCT (Animal Care and Control Team) Philly. It was through this connection that Mary Grace and Jeffrey met their second dog, Nala, a Pit Bull mix.

They can’t imagine life without Nala, who is around ten years old now or their six cats – Olive, Sophie, Crackle, BC, Grayson, and Rascal. Mary Graces said about her cats, “They all found us.” Between strays in need of extra help or cats who needed rehomed, all their feline companions have made their own way into Mary Grace’s heart and home. Animals are intuitive like that – knowing how to find the humans they need. Two of the less social cats choose to live exclusively in the addition to Mary Grace and Jeffrey’s house, which they now call “the catuary.”

Throughout her life, Mary Grace said she “always had rescue dogs and cats.” She always advocated for animals, especially rescues, and has now chosen to take that advocacy into volunteering. Mary Grace’s role in the kennel is extremely important, and our veteran volunteers have expressed repeatedly how happy they are to have her on the team. She makes their dog-walking duties easier and safer by ensuring dogs and handlers have a clear path through the kennel, which is critical to avoiding unwanted interactions such as bites. She helps dogs stay en route to adoption, supporting countless pups in their journey to a lifetime of happiness and love, just like she gave Toby and Nala. Mary Grace said she enjoys being around the dogs and among a community of fellow animal lovers. We’re very thankful for her time and dedication to the shelter, as well as her and Jeffery’s longtime donor support of the York County SPCA. It’s clear that loving animals runs in their family’s blood. They’ve extended that love beyond their own pets and into our shelter, the community, and our community’s animals in need of a forever home. We could not be more grateful.